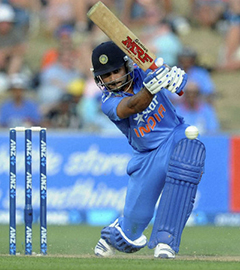 Parochialism in news always meets its apogee in sports reporting. So, in the wake of the Black Caps’ victory in the opening one-dayer at McLean Park in Napier, New Zealand media crowed (Black Caps 1, World’s Best 0) and Indian news rued (Kohli ton goes in vain). Both countries’ sports media, however, were unanimous about a cracking game of cricket.

Young Kiwi allrounder Corey Anderson won the man of the match for his 68 runs off only 40 balls (four sixes, including one out of the ground) and two crucial wickets. But for sheer batting elegance and power it is hard to go past Virat Kohli’s 123 runs hit to every part of the field.

Hyperbole from the Times of India gives a hint to the man’s mixture of class and belligerence: “With his rugged looks, aggressive mien and cavalier batsmanship, Virat Kohli surely doesn’t have to bother too much with the art of wooing; but, clearly he prefers to live dangerously and, maybe, even believes in the age-old philosophy that the real thrill is in the chase.”

His century was his 18th in only 119 innings (a world record) and it was the first time India has lost when Kohli has scored a hundred when chasing a total.

This was a match of high quality. The bowling of both sides on a belter of a pitch was world-class, with the Indian seamers taking wickets at regular intervals and stemming the run rate with pin-point toe-crushing yorkers. The Kiwis excelled in upsetting their opponents with well-directed, 140kmh-plus short balls.

Mohammed Shami showed pace, swing and movement off the pitch in taking four New Zealand wickets, demonstrating what an exciting new talent India possess and what a handful he will prove on the more sporting test wickets. Mitchell McClenaghan took quite a bit of tap but secured four wickets, including Kohli and Indian captain MS Dhoni.

India is ranked the number one side in one-day cricket and Brendan McCullum told the Times of India that “the result is huge to us. To start the series against what is a very good Indian team, and then Virat Kohli performed as well as what he did, yet we came out on top – it is a really good sign.”