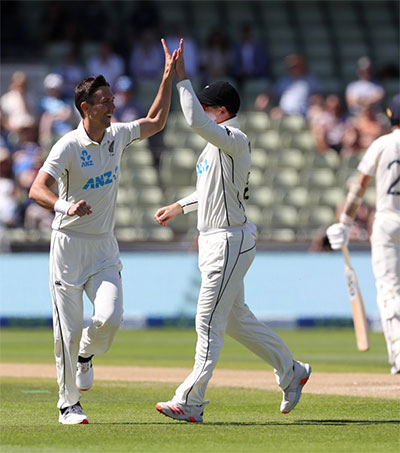 “England’s dismal second-Test defeat was confirmed inside an hour on the fourth morning at Edgbaston, giving New Zealand a 1-0 series win,” Stephan Shemilt reports for the BBC.

“It is England’s first home series defeat since 2014, when Sri Lanka won a two-match series 1-0.

“And it is New Zealand’s first success in England in 22 years,” Shemilt writes.

“If there remained any doubts about whether New Zealand will provide stiff competition to India in the World Test Championship final, they have been cast aside in two Tests where they comprehensively outplayed England.

“Their batsmen gave England a lesson in playing late, playing straight and valuing their wickets. Their bowlers maintained a fuller length. Whereas England’s catching is a lottery, the Kiwis miss virtually nothing.”