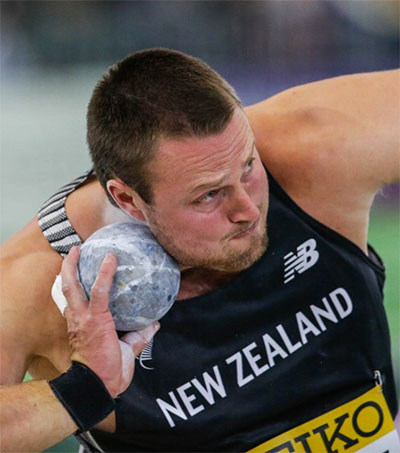 Tom Walsh, 24, from Christchurch, has hurled his shot put a personal best of 21.78m, taking the gold medal and bettering his previous mark in outdoor competition of 21.62m, at the 2016 IAAF World Indoor Championships in Oregon.

Walsh’s shot, the longest he has thrown in indoor or outdoor competition, was 89cm further than his nearest competitor.

Walsh had previously placed third at the World Championships two years ago. The World Indoor Championships marked the first time Walsh has thrown indoors, and it proved to be a strength for the New Zealander.

The United States had won the last six World Championships in the shot put, but only one American entered the final field of eight, Jonathan Jones. The final appeared to be Walsh’s to lose as his final five throws all went over 21m. No other thrower went over 21m.

Walsh, a builder, told the New Zealand Herald: “My workmates will probably say, ‘why didn’t you throw further?’”

The Herald said Walsh paid tribute to coach Dale Stevenson and New Zealand-based mentor Ian Baird for instilling the “virtue of patience” in his preparation, which saw him overcome a hip injury.