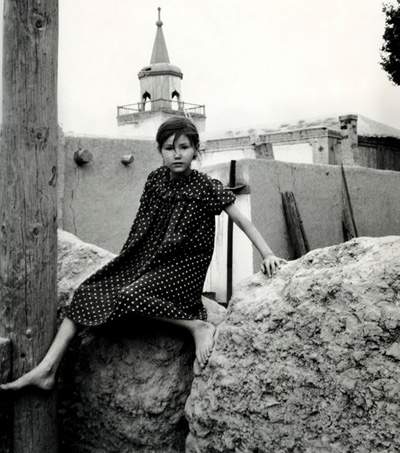 “In 1956, New Zealand photographer Tom Hutchins traveled to the People’s Republic of China on a freelance assignment, earning a rare opportunity to document what was then one of the world’s most isolated countries,” writes Matt Schiavenza for Asia Society. Asia Blog spoke with Hutchins’ friend, photographer and photo historian John B. Turner, who began the painstaking work of preserving his friend’s photographs of China.

Hutchins “seldom talked about his own work, which included a stint as a stringer for Time/Life in the South Pacific. I found out about his China visit, and decided to get him to show it,” said Turner.  In 1989 he visited Hutchins and started to search for his China papers and books underneath the house, where the majority of the images had been stored.

“Among the rotted and severely damaged documents were nearly 600 rich Agfa Brovira gelatin silver prints made for a book on China that he could not find a publisher for during the 1960s,” said Turner. “Ninety percent of his prints had rotted away, and his negatives, proof sheets, and transparencies were missing — only to be rediscovered three years later inside his house.”

Finding Hutchins’ images was the starting point for Turner’s voluntary project of preserving his friends’ images. 27 years later his work is paying off.

Turner compares Hutchins work with the works of Marc Riboud, Brian Brake, and Rene Burri as well as Henri Cartier-Bresson, who he describes as “the greatest of them all.”

“Tom went to some of the same places they did, but also got to Xinjiang, where he took remarkable photographs of minority populations in places like Urumqi,” he said.

“He tried to be a good anthropologist by minimizing his own presence and effect on the subjects of his photographs. This was rather difficult to do in China, where foreigners were rarely seen in many communities, so he inadvertently became the center of attention rather than a fly on the wall,” said Turner.

“That’s why I call my debut exhibition of his work, to be shown at the upcoming 2016 Pingyao International Photography Festival, Seen in China. Tom Hutchins. 1956.”

When asked how Hutchins gained permission to travel to China in the 1950s, Turner explained that Hutchins “grew up with Chinese friends in Auckland, aspired to be an outstanding photographer — and realized his dream.”

“He was the chief photographer at the Auckland Star newspaper when he was forced to choose between keeping his job or going, at the displeasure of his U.S.-supporting bosses, to China. He went to China as an independent photojournalist with the informal support of Time/Life, which processed most of his film, catalogued it, and published a nine-page spread called “China on the March” in its January 1957 U.S. and international editions.”

“Tom had a major interest in how minority cultures were being treated in the PRC, which is consistent with other themes in his life. He was a humanist, first and foremost,” said Turner.

His most “moving work profiles ordinary men and women, including a rare glimpse of ethnic minority populations living in China’s remote west,” reports the article.