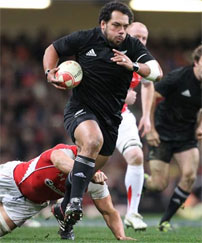 Auckland-born tighthead John Afoa has signed a two-and-a-half-year contract which will see him join Ulster in the autumn as soon the World Cup ends. Afoa is a direct replacement for 31-year-old Springbok BJ Botha whose fitness has been a source of concern to Ulster. The man who is coming to take over not only is younger, but he is in his prime in terms of fitness and game maturity. Ulster’s director of operations David Humphreys said: “Our objective is to be able to compete with the top teams in Europe and it was with that in mind that we decided we needed to strengthen our front row.” Afoa was a student at Auckland’s St Kentigern College, where he played first XV rugby alongside fellow All Blacks Joe Rokocoko and Jerome Kaino.