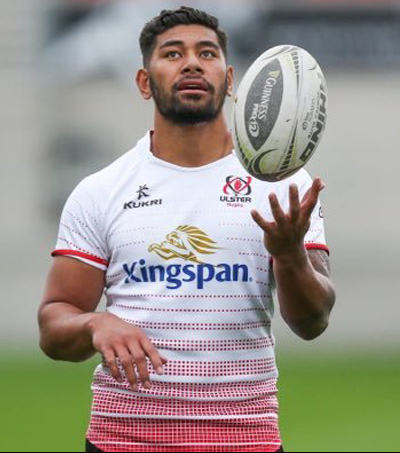 Charles Piutau: “I Felt Invincible As An All Black”

Former All Black Charles Piutau speaks to The Guardian’s Donald McRae about abandoning his Test career with the All Blacks to play for Ulster and, from next season, Bristol. When he joins Bristol he will become the world’s most highly paid rugby player. “Yet his motives are more than mercenary and reflect his arduous childhood as well as the growing problems for Test rugby,” writes McRae.

“I really had to see the bigger picture. When I was in New Zealand it felt like the All Blacks were everything. It felt like you were going to play forever. You felt invincible. But, taking a step back, you realise it’s such a short career. For me, what really hit home was remembering everything my parents had done for me and my siblings. They left Tonga for New Zealand to give us better opportunities. And for me, coming here, I had the same chance to do something similar for my family,” said Piutau, “a dynamic full-back who can also play on the wing.”

The former All Black says he missed “playing in that jersey”, but he has “become an All Black fan now.” “You see guys you played alongside that are still doing well in the jersey and you’re happy for them,” he said.

“In swapping a black Test jersey for Ulster’s white shirt, Piutau endured the disappointment of exclusion from New Zealand’s 2015 World Cup squad. He could have kept his decision a secret but he announced in March 2015 that he would be joining Ulster 16 months later. The All Blacks head coach, Steve Hansen, was reputedly angry and the New Zealand Rugby Union was intransigent,” writes McRae.

“That was the hardest point in my career so far. It was another dream to play in a World Cup – and falling short was tough. But the Ulster offer came out of the blue. I was counting on my agent agreeing a contract with New Zealand and he had to tell me about Ulster the night before we were meant to finalise things. I was like: ‘You’ve got to give me two weeks to think about this.’ I wasn’t thinking of coming overseas.”

“Once he was axed from Hansen’s squad the NZRU refused to endorse an extension of Piutau’s contract with the Blues. He faced seven months outside of rugby and was relieved to be offered a short-term deal in England,” reports the article.

Piutau said “saying goodbye to team‑mates, friends, coaches, management and the fans” was always the hardest. “But everyone has been understanding and it helped I could speak to the team first. I said: ‘This has been a very hard decision but I hope you all know I’ll give 100% this season. We’ve still got so much to do together.’ I was nervous at the start but I spoke from my heart. We have a lot of potential and I really want to make it a special farewell season.”

“Piutau will become rugby’s first million-pound man but he seems too grounded and bright to be blinded by that tag,” writes McRae.

“I’m still a Pacific Island kid who remembers our upbringing – and I hope to inspire other Pacific Island kids that you can do whatever you want to do. I’ve taken a place on the board of the Pacific Rugby Players’ Welfare (PRPW) association because we come from a very small community which is big on family and village support. Lots of guys end up in Europe and find it difficult to transition. We support them” said Piutau.