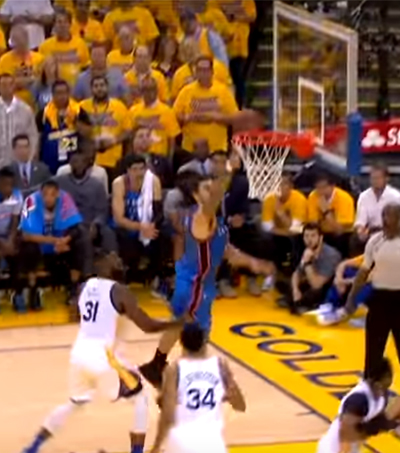 “All year, the Oklahoma City Thunder have been largely dismissed as serious title contenders. After beating the Spurs and stunning the Warriors in Game 1 in Oracle Arena, it’s time to forget everything I thought about this team,” writes Nate Scott for FTW!. The source of the Thunder’s leap to the next level comes from Steven Adams.

Goofy center Adams has transformed into one of the most effective bigs in the league, and just in time. “Compared to his play a year ago, it’s stunning to see what he’s become,” according to Scott.

“Adams is no longer the clumsy big launching his elbows into people. He’s become a refined defender and excellent rebounder, as well as an underrated finisher around the hoop.”

On Monday night’s match against the Warriors, “Adams went for 16 points and 12 rebounds”. He made the difference.

“Time and time again, especially in the fourth quarter, Adams’ length and mobility mucked up the Warriors offense. And he nailed two clutch free throws to put the game to bed”, according to the article.

The New Zealander has “become the type of player that can pick apart the Warriors, no matter the lineup. And the Warriors will need to figure out how to beat him if they want to win this series.”