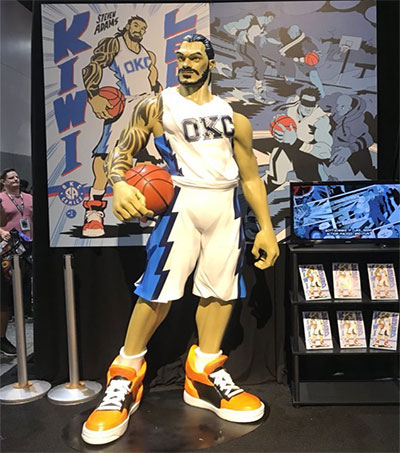 For four days during the annual Comic-Con, the San Diego Convention Center is a treasure trove of everything pop culture fans love: comics, super heroes, super villains, video games, movies, TV shows, books and more. To take its readers inside the madness, The San Diego Union-Tribune found 10 things that excited them in the exhibit hall, including a statue of a New Zealander, NBA player Steven Adams.

Rotorua-born Adams, of the Oklahoma City Thunder, is now featured in a comic about his life called Kiwi Legend, the newspaper reports.

The comic, which was on sale at the event, was produced by artist Corey Lewis Reyyy. Reyyy said in a video posted on the Thunder’s Twitter page that Adams was an easy subject choice.

“He’s a really cool kind of character to write and to draw,” Reyyy said.

“In the comic, he like starts, I wouldn’t say brash, but like a salt of the earth type of fellow, who’s kind of struggling, who’s really tough, but he has to learn stuff, as we all do. He’s got a very interesting family, which is amazing.

Adams will run his regular coaching clinics in New Zealand in August, which will be held in Auckland, Palmerston North and Dunedin.