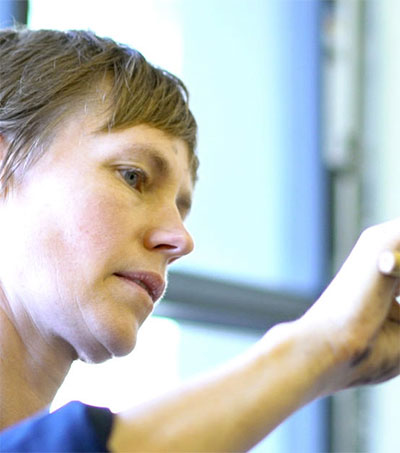 New Zealand-born artist Francis Upritchard is all about creating art that leaves behind societal norms, according to Jesse Oleson writing for The San Diego Union-Tribune.

“Art is supposed to be fun,” London-based Upritchard says. “Work can get very tight and rational and the whole idea is to not be those things.”

Upritchard, whose work is on exhibit at Lux Art Institute in Encinitas, San Diego until 23 March, creates art based on her interests and her inspirations using multiple media.

“This show is quite different because normally I would make all the work especially for a show. So this is more like a mini-retrospective,” says Upritchard, a 1998 graduate of Canterbury University of Fine Arts. “This has a broader variety. Normally it would be more focused in theme.”

Part of her show is focused on her work with papier-mâché and recreating the imagined shape of early dinosaur research.

“I call them dinosaurs, but they are really more like creatures,” says Upritchard, who studied books with drawings of what humans first believed dinosaurs to look like as their bones were first being discovered. These pieces only take three days to construct, which is less time than it takes for Upritchard to tear apart the newspapers she uses.

“I’ll be working with [balata] mostly while on residency,” she says, whose work has been exhibited all over the globe, from the Hammer Museum in Los Angeles and Anton Kern Gallery in New York to Kate MacGarry in London and Marugame Genichiro-Inokuma Museum of Contemporary Art in Kagawa, Japan. “It only gives me 20 minutes to work with, but if I mess it up, I can always put it back into hot water and then start over.”