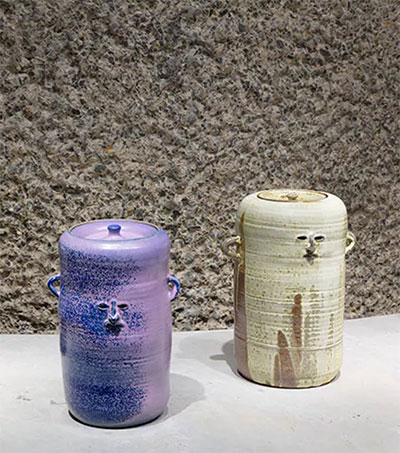 “New Zealand-born artist Francis Upritchard is renowned for drawing from craft traditions, and her installation ‘Wetwang Slack’ [on at London’s Barbican Centre] is no exception. Contrasting with the building’s Brutalist architecture, Upritchard has filled the curving space with dozens of handmade objects in a rainbow palette of hues,” Isabella Smith writes in a review of the exhibition for Apollo magazine.

“That the installation’s name is borrowed from an archaeological site in Yorkshire indicates Upritchard’s fascination with how societies explore their histories. But if there’s a response here to our relationship with artifacts, it’s little more than a playful, David Shrigley-esque smile. Unlike Upritchard’s early grotesque sculptures of the shrunken heads of white colonials, which through an antagonistic reversal of roles contributed to debates around the return of Māori preserved heads (mokomokai) to New Zealand, there’s nothing critical to be found.

“Instead, ‘Wetwang Slack’ feels like a joyful celebration of the comparatively non-hierarchical nature of craft, open to experts and have-a-go hobbyists alike. Take for instance Upritchard’s choice of polymer clay, which she sculpts over wire armatures and then paints. They are skilfully modelled, bearing realistic details such as lined eyes and chipped nails. However, the material is one scorned by professional ceramic artists – it is in fact a plastic, and contains no clay at all. There’s a gleefully liberal use of appliquéd patches with diamanté eyes, the Do-It-Yourself ornaments covering clothing and hats alike.”

Wetwang Slack is on at the Barbican until 6 January 2019.