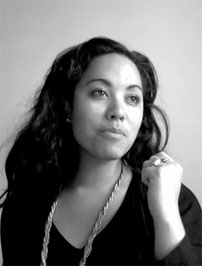 Through a Pacific Lens

Auckland poet Courtney Meredith, 26, was at the Frankfurt Book Fair this week for the launch of her debut book Brown Girls In Bright Red Lipstick. Meredith has been described as leading a generation of new poets and Brown Girls In Bright Red Lipstick “captures a youthful urban Auckland landscape through a Pacific lens”. Meredith says despite the playful title her works are complex and layered. “It’s a panoramic view of youth with an undercurrent of something quite raw, political and representing a transition period of that culture.” Meredith was in Berlin for a writers’ residency in 2011. In June, she was a delegate of the British Council in London for a series of Phakama arts initiatives that formed part of London’s cultural Olympiad.