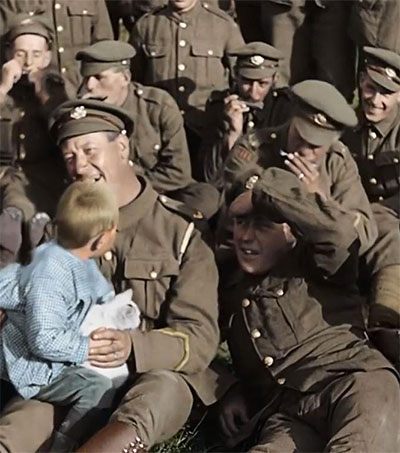 They Shall Not Grow Old Highest Grossing Release

Originally presented on 17 and 27 December in the United States, Peter Jackson’s World War I documentary, They Shall Not Grow Old, grossed US$2.6 million in its encore, bringing the total gross for the release to US$8.34 million, smashing the record for highest grossing US Event Cinema presentation, according to Jim Amos writing for Forbes.

Jackson’s film was a hit with both critics and audiences with the Associated Press calling it “an immersive, haunting and often transcendent experience that’s unlike anything you’ve ever seen before”. The film restores, colourises and applies 3D technology to original film footage from World War I. Worldwide distributor Warner Brothers released the film for regular theatrical engagements on 1 February in 150 markets and approximately 500 theatres.

They Shall Not Grow Old has now nearly doubled the previous Event Cinema record, which was set by Dragon Ball Z: Resurrection F, which grossed US$4.6 million in 2015.

“We have heard from moviegoers who have gone back to see They Shall Not Grow Old multiple times, bringing new family members and friends each time,” CEO of Fathom Events Ray Nutt said. “The emotional response that audiences have had to this film is genuinely extraordinary and Fathom Events is proud to have worked with Warner Brothers to bring this one-of-a-kind cinematic experience to US movie theatres.”

They Shall Not Grow Old premiered simultaneously at the BFI London Film Festival and in selected theatres in the UK on 16 October 2018, before airing on BBC Two on 11 November 2018 (the hundredth anniversary of the Armistice of 11 November 1918).

Tags: Forbes  Peter Jackson  They Shall Not Grow Old  World War I