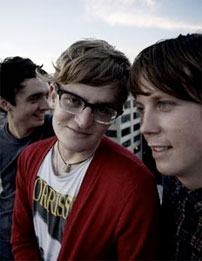 Ten Bands You Should Know

“If your knowledge of New Zealand’s music scene doesn’t extend beyond Flying Nun Records and Flight of the Conchords, then rejoice — there’s a shitload of excellent local music just waiting to be discovered,” Tom Hawking writes for music site Flavorwire. Hawking surveys “10 Great New Zealand Bands You Should Know,” focusing on the “indie stuff”, including “foremost contemporary heirs to the Flying Nun sound”, Die! Die! Die!. Hawking’s list also includes, Lawrence Arabia, The Coolies, Terror of the Deep and The Bats — “a genuine original Dunedin band who are still going strong today, some 30 years after they first came together.”

Tags: Bats (The)  Die!Die!Die!  Flavorwire  Flight of the Conchords  Flying Nun  Lawrence Arabia  Terror of the Deep  The Coolies