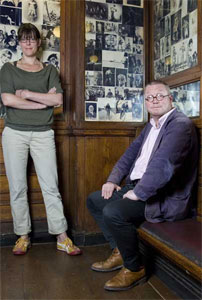 Tales From the Kitchen

New Zealand-raised chef Anna Hansen tells The Independent how she came to meet the chef behind London’s St John Bar and Restaurant, Fergus Henderson. Hansen came to the UK in 1992 and got a job at The French House Dining Room in Soho as a dishwasher, before rising to head chef. She opened her own restaurant, The Modern Pantry, in London’s Clerkenwell in 2008. “I arrived at The French House almost straight off the plane,” Hansen explains. “When one of the chefs left, Fergus and [his wife] Margot began training me. They were so trusting, caring and nurturing. He taught me all kinds of stuff to do with meat — how to pluck a bird, bone an animal, what to do with tripe, how to boil a pig’s head; it’s all been invaluable to me.” Henderson says: “I now see her as the ambassadoress of New Zealand cooking. Her [fusion] food is very lively.” Henderson’s wife, caterer Margot Henderson was born in New Zealand. She is the founder of London’s Rochelle Canteen. The Modern Pantry Cookbook by Anna Hansen is out in the UK on 2 June.