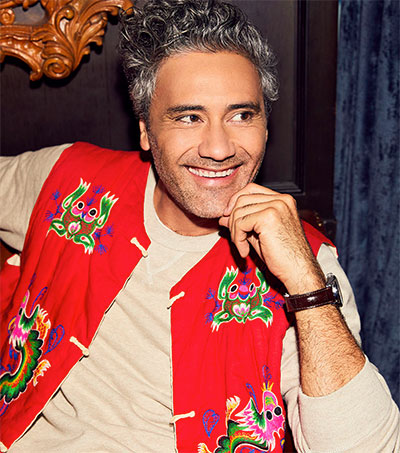 Taika Waititi is a fashion superhero, according to Degen Pener writing for The Hollywood Reporter. The proof: When the New Zealand native and director of November’s Thor: Ragnarok showed up at Comic-Con in July, he stole the spotlight from his stars, including Chris Hemsworth, Cate Blanchett and Idris Elba, by pulling off an outfit that almost no other Hollywood man could: a men’s romper look – and in a pineapple print, no less.

Waititi, 42, is part of a burgeoning group of entertainment-world men with highly original and bold personal style, from such stars as Jared Leto, Atlanta’s LaKeith Stanfield, Pharrell Williams and Harry Styles to director Paul Feig of Bridesmaids and Spy.

“Some would call it peacocking. It probably is, but I’ve always loved bright things and things that stand out,” says Waititi during a break from putting the final touches on Marvel’s Thor sequel, his first big studio film.

But now that he has ascended to the directing big leagues, Waititi hasn’t become any more cautious with his style. Unrestrained patterns and prints are a staple for him, whether it’s shirts covered in mega-polka dots or bananas or bomber jackets, such as the one with a black panther design by Stolen Girlfriend’s Club that he wore to the Sundance premiere of Hunt for the Wilderpeople.

Waititi says that he has never experienced a downside to standing out with his wardrobe in Hollywood. “I don’t ever wear anything conservative in a business sense,” he says, admitting he finds men’s style in Los Angeles lacking. “In Hollywood in general, especially in the studios, it’s a very boring style. It’s very safe.”

When it comes to style, Waititi – who is based in Auckland but spends lots of time in LA – pulls off his idiosyncratic style choices with a dose of braggadocio and humour. “Sorry you’re not me. #god,” he wrote on his Instagram when he posted a shot of his pineapple outfit, which technically wasn’t a romper but a matching shirt and shorts combo by LA-based Wallpapr.

For another Instagram post in which he wore a denim jacket paired with jeans, Waititi typed, “Yeah it’s double fucking denim. Even the hair is denim. The lesson? Be me. #GodOfDenim.”