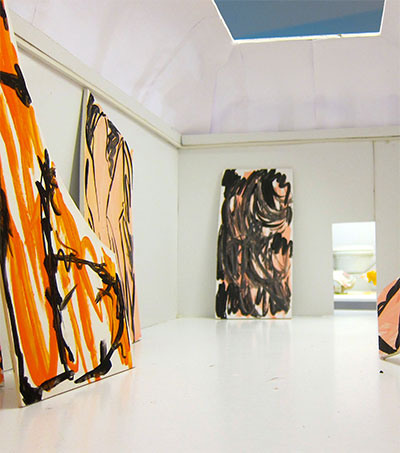 Since attracting the Zurich-based Galerie Mark Muller 17 years ago, the Swiss have embraced New Zealand artist Judy Millar’s wildly colourful art with its untamed brushstrokes, and given the North Shore born-and-raised artist her first international survey exhibition. Now on at the Kunstmuseum St. Gallen, The Future and the Past Perfect brings together around 45 of Millar’s works.

The museum’s website states, “… audiences in Switzerland have been well acquainted with the artist since 2004 and love her open, expressive work …”

Since 2005, Millar has divided her time between working and living in Berlin and at her West Auckland home; in 2009, she was New Zealand’s representative at the Venice Art Biennale.

For the St. Gallen’s exhibition, she has worked with art museum staff to gather together works from New Zealand and across Europe. While she describes it as a huge undertaking, she says it’s amazing to see nearly 40 years of work brought together for the first time.

“This level of attention being paid to my work is beyond anything I could have imagined,” Millar says.

At the same time, Millar is also included in an exhibition called Frozen Gesture at a second Swiss museum alongside the likes of American heavyweight painters David Reed and the late Roy Lichtenstein.