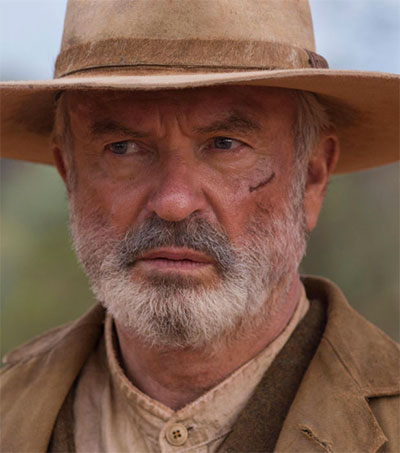 As is the case with many a beloved screen actor, everyone has their own mental image of Sam Neill, Karen Han writes for the Village Voice. For some, it’s of the prickly paleontologist Dr Alan Grant from Jurassic Park. For others, it’s of desperate, spiralling Mark from Possession, or grumpy Uncle Hec from Hunt for the Wilderpeople. (For my mother, it’s “the man who raises those pigs”; for my New Zealander best friend, “our national treasure.”)

His latest role – as a religious rancher dealing with the fallout from the murder of a white man by an aboriginal farmer in Warwick Thornton’s Sweet Country – is just as indelible as any of those, not least because the film itself is so thoughtful and delicately crafted. It’s as much a simple western as it is an indictment of Australia’s checkered historical conflicts between colonisers and the indigenous population.

It’s also Neill’s first western, which, as he tells the Voice while on vacation in Tahiti, is a bit of a personal milestone. So is the growing success of his vineyard, Two Paddocks. We spoke about the film, the wine, and everything in between – including old (bad) reviews.

“[Sweet Country] is part of a wide discussion, in that there is quite a bit of Australia’s dark past that has become increasingly the subject of discussion, and it’s really only now that people are becoming aware of what happened,” Neill says.

“It’s not dissimilar to the United States. It involved land clearance; it was not just chopping down trees. It was also eliminating the people that lived there, and in the drive West, that’s what happened. People drove West in the United States, and it involved dead people, and the destruction of cultures. This film, made by an aboriginal director, is part of that discussion. It’s only really in the last ten years that, as an outsider and a non-Australian, I’m aware of people really talking about the massacres that took place.”

“It works on a number of different levels, and if you just want to look at a great western, there it is, but if you want something that’s thought-provoking, it offers that as well,” he says.

Neill is currently working on the Rachel Griffiths-directed Ride Like a Girl and will star opposite Bryan Brown, Rachel Ward and Richard E. Grant in Palm Beach.