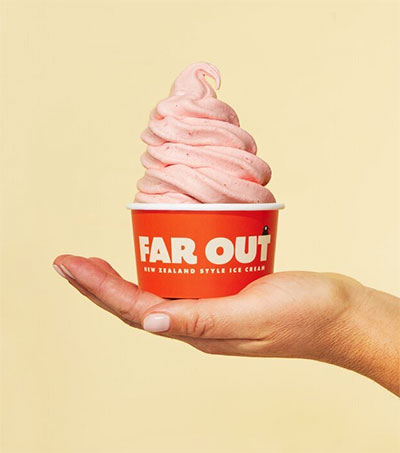 When American August Radbill visited New Zealand for the first time a few years ago, he became enamoured with our real fruit ice cream, “a simple, ultra-creamy style that swirls together a scoop of fruit with vanilla ice cream in a machine specifically made for the dessert,” Erin Kuschner writes for Boston.com

When Radbill returned to Boston, he and his friend launched Far Out, a New Zealand-style ice cream company that debuted as a pop-up shop on Nantasket Beach in Massachusetts.

In June, they set up a temporary home serving ice cream to customers during Red Sox home games. It’s all in anticipation for their permanent flagship location, which will open later this year, Kuschner writes.

Far Out isn’t the first New Zealand-style ice cream shop to land in the United States – there are similar shops in Colorado, Oregon, Texas, and Hawaii – but it’s a style that hasn’t yet gained popularity in New England.

“We’ve had some Kiwis here who say this is just as good as it is at home,” Radbill said.