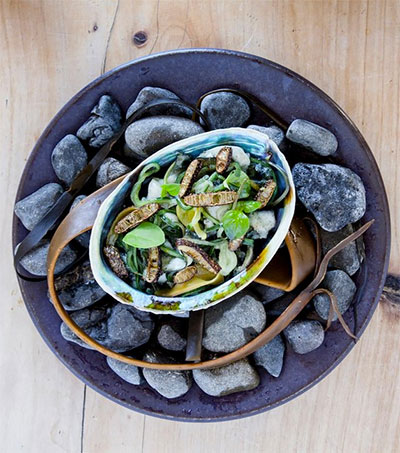 Seven Dishes You Have to Eat in New Zealand

Nostalgic dishes are an essential part of experiencing the wild and wonderful South Pacific dreamland, that is New Zealand and various interpretations on the classics can be found in both formal and casual establishments throughout the country, Amy Louise Bailey writes for Vogue. Bailey recommends that if you are planning on making the journey down under, dine like a local and become acquainted with national staples, which include pāua, kumara, chocolate milk, Canterbury lamb and ice cream.

Al Brown, owner of eatery and oyster bar Depot, and perhaps the most quintessentially ‘Kiwi’ chef there is, believes that the abundance of nature requires no need for ‘smoke and mirrors’.

“Our ace of cards in the culinary deck are our four distinct seasons, fertile soils, and our distance from the source – be it from the sea or the land,” Brown explains.

Some of the country’s leading restaurants offer distinctive pāua dishes, including Auckland’s Orphans Kitchen (pictured) and Logan Brown on Wellington’s lively Cuba Street strip, which serves pāua ravioli with coriander, basil, and lime beurre blanc. Further south at Amisfield (Queenstown’s most iconic vineyard and restaurant), you can sample pāua pie with mānuka smoked potato on a tasting menu with matching wines, all produced on-site. For more casual affairs, many fish and chip shops around the country have pāua fritters listed on chalkboard menus. The elusive mollusks are also prized for their metallic shells that are polished and sold in souvenir shops, reincarnated as jewellery or art.

“Global influences from all cuisines can be found at any level of eating experiences, however, there is still a great value placed on nostalgic dishes that most of us have grown up with, such as roast lamb with mint sauce, pāua fritters, and pavlova,” Brown says.

Dairy is one of New Zealand’s biggest industries and the artisan ice cream scene has grown to rival some of Italy’s best gelato. The unofficial national flavour is hokey pokey: caramelised honeycomb mixed into velvety vanilla; and most dairies serve it by the scoop along with other classics like orange chocolate chip, boysenberry, and jelly tip. In Auckland in particular, ‘designer’ ice cream has flourished, and places like Giapo and Aqua S have become Instagram gold, serving glossy swirls topped with toasted marshmallows, Afghan biscuits, freeze-dried raspberries, and whipped meringue.