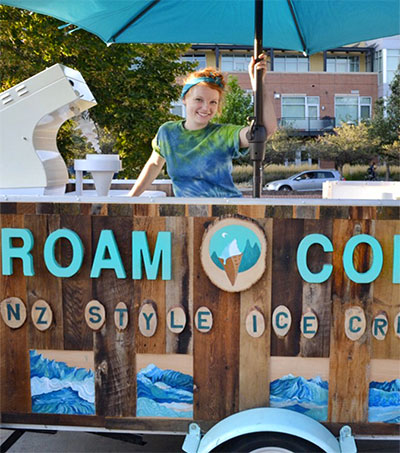 “Two torn labrums in my hips,” says American Emily Morris of the injury that led her to create a mobile ice cream operation. She’d just returned from a yearlong trip to New Zealand, where she fell in love with the local take on ice cream, and her entrepreneurial drive was locked in fifth gear while she rehabilitated.

Morris took the plunge in April this year. She used a degree in architecture to build a cart, used a background in freelance graphic design to develop a brand, bought a unique machine that makes New Zealand-style ice cream, and started selling it on the streets of Boulder, Colorado. “It takes the idea of combining power tools with ice cream to make it even better,” Morris says.

“It is a machine that they’ve been using in New Zealand for the past 30 years, and it basically has a drill bit on it, like an augur, and so you end up putting vanilla ice cream and frozen fruit into a funnel and then the drill blends it into a completely smooth soft serve,” she says. “It creates a really unique texture. It kind of whips it.”

If you’ve never heard of New Zealand-style ice cream, you’re not alone; people from the island nation have been fooled by the moniker, too.

“The second day I was in business I had a New Zealander say that she heard a rumour about Kiwis and ice cream and [when she tried the Roam Cone ice cream] she said, ‘I thought this was regular ice cream, I didn’t know it was special. Now that I think about it, I’ve never seen it in this country.’ She got really excited that she got to experience something from her childhood,” Morris says.

The drilling whips the ice cream and fruit mixture into a fluffy, almost mousse-like texture, and the heaping doses of water and fruit help to keep it light like sorbet.