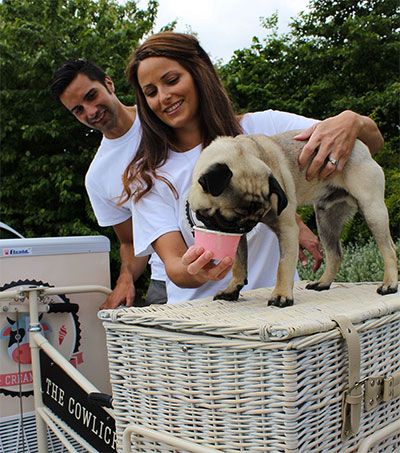 “The whole concept started five years ago when Plymouth Argyle went into administration,” the Gisborne-born ex-Argyle athlete explained, “I realised that I needed to consider what I would do if my career in football ended. I had nothing on my CV apart from football.”

The couple hopes to settle in Plymouth permanently, providing hand-made artisan ice cream for local businesses and events such as weddings from their base in Estover, with the vision to eventually open a shop.

The ice cream is made of locally sourced ingredients. Flavours range from chilli chocolate to champagne and strawberry sorbet – and for pooches there’s even exclusive lactose-free flavours for dogs.

Fallon played for Argyle between 2007 and 2011 and has since then joined teams Yeovil, Aberdeen and Crawley. He now plays for Bristol Rovers.

He has been capped by New Zealand at international level and scored the goal that took the team to the 2010 FIFA World Cup.