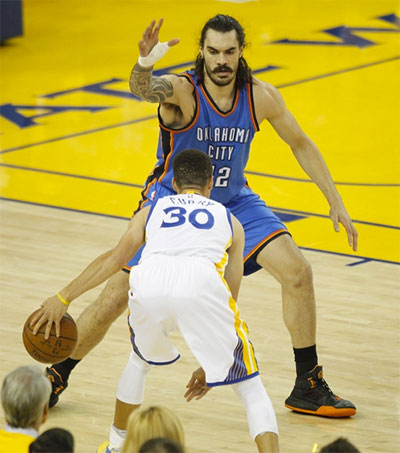 How Steven Adams Is Becoming Star of NBA Play-Offs

With his long hair and handlebar moustache, Steven Adams, 22, looks like he has stepped out of the 1970s. But this 7ft tall New Zealander with a sleeve of tattoos is fast becoming the star of the NBA play-offs for team Oklahoma City Thunder, BBC Sport reports.

In game four of the Western Conference finals Rotorua-born Adams scored 11 points and seven rebounds in the win, threw a one-handed bullet pass to Andre Roberson just before half-time.

More than 22,000 tweets were sent in an hour about Adams’ baseball style throw and the player began trending on Twitter in his native New Zealand and the US. Then there was a young fan who turned up to the game at Oklahoma’s Chesapeake Arena, dressed as Adams with a fake moustache and tattoos in tribute to her hero.

Many Twitter users felt the youngster was the real star of game four and even Adams himself tweeted that it was “absolutely amazing”.

Both teams are now tied (3:3) following the Warriors 108-101 victory in game 6 of the Conference finals on Sunday and will face each other in the deciding seventh game in Oakland on Tuesday (NZ time).

Six of his brothers have played basketball for New Zealand, while his half-sister Valerie, 31, is a double Olympic champion shot putter.