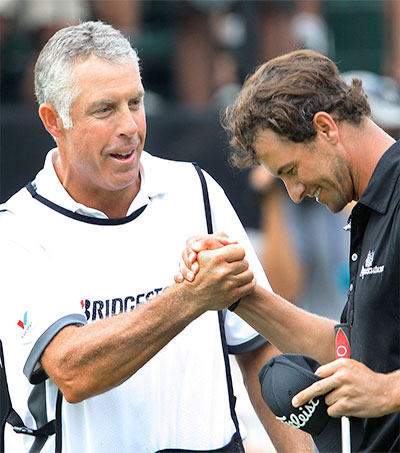 After a career that has lasted nearly four decades, New Zealander Steve Williams, 50, has been inducted into the Caddie Hall of Fame by the Western Golf Association.

Williams received a bronze caddie statue as part of the ceremony at the BMW Championship in Colorado, where Williams is on the bag for Adam Scott (pictured right), for whom he has caddied since 2011.

“I want to thank the Western Golf Association for inducting me into the Caddie Hall of Fame,” Williams said. “I very much appreciate the honour.”

Williams began caddying at the age of 10 and got his first professional job with Australian Peter Thomson at age 13. His career has included stints with Greg Norman and Raymond Floyd, although his highest-profile assignment was working for Tiger Woods from 1999-2011, with the pair teaming up to win 13 major titles.

After leaving Woods’ bag he began working for Scott, helping the Australian win the Masters in 2013 and reach world No. 1 earlier this year. He has previously stated that he plans to make this his final year as a full-time caddie.