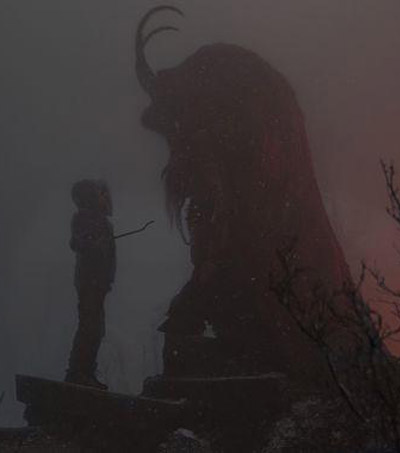 Krampus tells the story of Max, who stops to believe in Santa more and more when his “dysfunctional family gathers for Christmas”. When “a blizzard and a power outage hit their neighbourhood” Krampus – part of an ancient Christmas myth, is on his way to “punish those who’ve ended up on the naughty list”.

“It’s one thing to be terrified or enthralled when you’re watching a film. To then leave the cinema and realize it’s based on real myths and legends only makes it sink in even deeper,” said Dougherty in an interview with USA Today.

“If you study the myth, there’s something darkly playful about him. He’s having a good time doing what he does and he enjoys the cat-and-mouse aspect of it.”

The film, which stars Adam Scott, Emjay Anthony, Toni Collette, David Koechner and Allison Tolman will be released on December 4 and has been filmed in New Zealand.

New Zealand’s Weta workshop also has been responsible for the specialty costumes for the film.