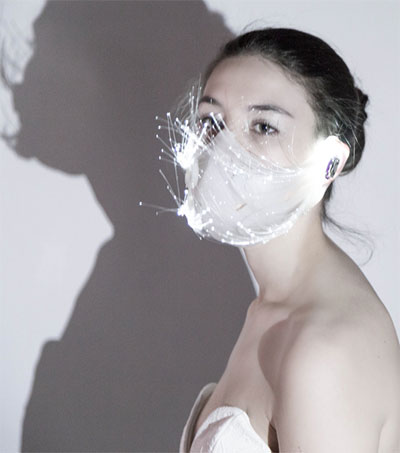 Liu created the piece this year while completing her industrial design degree at the Rhode Island School of Design.

She believes it is time to turn the mundane health accessory into a fashion statement, endowing them with a softer, mysterious look and dispelling both the variable efficacy and harsh, impersonal – even threatening – appearance of existing masks. “A lot of my family is still back in China and they are complaining about pollution every day, but they don’t want to wear some of the masks out there because some of them are not very effective, and are also not breathable or not hygienic,” Liu said.

“Everyone is looking for a more fashionable option and also effective too.”

Liu cites nature as her muse. “This piece was particularly inspired by peacock feathers and underwater creatures that glow, so I was looking to a lot of natural creatures that could attract attention in a positive way,” she says.

What’s more, Liu envisages a future where pollution sensors could be incorporated into the mask, with the fibre-optic accessories offering both real-time feedback on air quality and a way to communicate with other mask-wearers.

But while such enhancements are still on the drawing board, Liu is developing a commercial line, originally designed for her senior thesis, that offers wearers the chance to express their personality in a more analogue way, featuring a see-through mask and a variety of intricate side straps. “The pieces on the side would be interchangeable so you could change it according to what you like or what you are wearing today,” she says. “That’s a more viable product.”