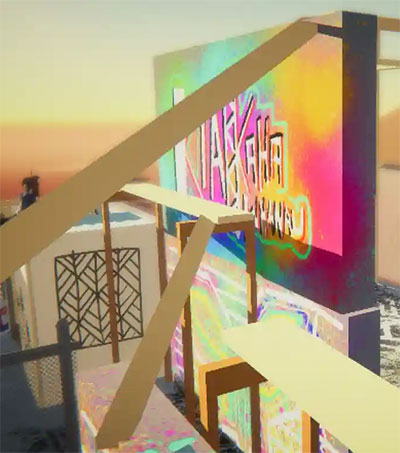 “Umurangi Generation is as much a game of hide-and-seek as of photography: just as much time is spent exploring the warren-like scenes in order to locate the next item in the brief,” The Observer’s Simon Parkin writes in a review of the “compelling” New Zealand-produced game, which takes place in Tauranga in the near future.

“Umurangi Generation is less interested in making value judgments about your virtual photography (“Art is subjective,” the game’s tutorial assures); instead, you are whisked to a series of highly stylised scenes and given 10 minutes to collect a set of specific shots to a tight brief: seven birds, two boomboxes, a mountain, and so on,” Parkin writes.

“Those with an eye for detail will notice there is more to this world than a series of chic sets: the game is infused with Māori influence (developer Naphtali Faulkner is of Ngāi Te Rangi), and tells the story of a militaristic occupation, in an ambient way. The result is a game as unexpected and compelling in its message as in its moment-to-moment challenge.”

“One of “Umurangi Generation’s great qualities is that it is unambiguous in its storytelling, and forces you to confront that story through its key mechanics: exploration and photo-taking.”