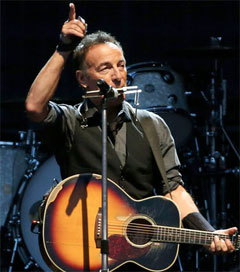 According to Rolling Stone, Bruce Springsteen made the most surprising cover choice of his career when he played an acoustic rendition of teenage Grammy award-winner Lorde’s song Royals during his Auckland show at Mt Smart Stadium.

“Springsteen’s version made the song sound like it was originally cut during the Nebraska sessions, and he tweaked the lyrics slightly, singing ‘you can call me king bee’ instead of ‘queen bee,’” the publication said.

“The show [in] Auckland marked Springsteen’s second-ever live appearance in New Zealand, and his first time there in eleven years.”

The Los Angeles Times described Springsteen’s cover: “Strumming an acoustic guitar in the mournful-folky manner to which his fans are accustomed, Springsteen chews through Lorde’s lyrics about never having seen a diamond in the flesh in a video clip posted on YouTube.”