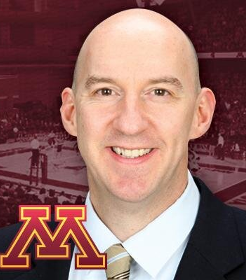 Christchurch-born Olympic Gold Medal volleyball coach Hugh McCutcheon, in his eighth year as coach of the University of Minnesota’s women’s volleyball team The Gophers, is preparing for the 2020 season with his incoming team the #1 pick of the nation, according to Volleyball Mag.

“McCutcheon has proven over his eight seasons as Gophers head coach he can adeptly handle a roster laden with talent but also eager for playing time,” reports Chris Long for ABC affiliate KSTP. “But he adds, much like in-season polls and rankings, he prefers not to put much stock in rankings.”

“The most important thing is we really like the class,” says McCutcheon. “They’re talented on and off the court, they’re academically strong and people of character – things we think are important – and it turns out, yeah, they can all play volleyball at a really good level.”

Since arriving on campus in 2012, McCutcheon has led the Gophers to three NCAA Final Fours, two Big Ten Championships, three Sweet 16 finishes and an Elite Eight appearance in just eight years. he holds a 216-53 collegiate coaching record following the 2019 season.

McCutcheon is the only United States coach to ever guide both men’s and women’s teams to Olympic medals. As the head coach of the U.S. Men’s National Team at the 2008 Olympic Games, McCutcheon and Team USA went undefeated in Beijing to claim its third Olympic Games gold medal and its first podium finish since 1992. He compiled a 107-33 record in four years with the U.S. Men’s National Team program.

McCutcheon mentored the U.S. Women’s National Volleyball Team to a 106-39 record in his four years. In his final three seasons with the women’s program, McCutcheon guided the U.S. to an 88-25 record with podium finishes in 10 of 12 tournaments. In 2012, Team USA captured its second consecutive Olympic Games silver medal with a 7-1 record.

McCutcheon’s love for volleyball developed in New Zealand where he played for Shirley Boys’ High and on the junior and senior national teams from 1986-90 before coming to the United States. He was also a member of New Zealand’s national team in 1996 and represented his country on the FIVB Beach Volleyball World Tour in 1997. He played for Brigham Young University from 1991-1993 after transferring from the University of Canterbury in New Zealand.

After receiving his bachelor’s degree in physical education from BYU in 1993, McCutcheon played professionally for two years in Finland and Japan before returning to BYU to complete his master’s degree in 1998. In 1999, McCutcheon received an MBA from BYU’s Marriott School of Management.

In the 2016 Queen’s Birthday Honours, McCutcheon was appointed a Member of the New Zealand Order of Merit for services to volleyball.