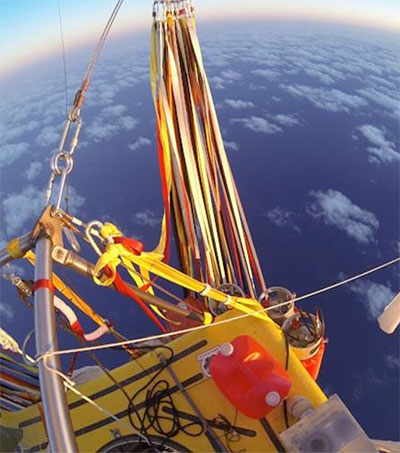 Spidertracks, which also has sales teams in Miami and Oregon, are dedicated to increasing safety and tracking in aviation, and are working to improve the technology behind tracking flights.

Customers of Spidertracks, who provide satellite-based tracking mostly to charter operators flying to remote or dangerous parts of the world, can monitor the movements of planes in near real time on their smartphones or laptops and exchange two-way text messages with the aircraft.

The Two Eagles balloon landed safely off the coast of the Baja Peninsula, Mexico, becoming the second vessel of its kind to successfully cross the Pacific Ocean.

In doing so, pilots Troy Bradley, of New Mexico, US and Leonid Tiukhtyae of Moscow, Russia, have also achieved unofficial world records for distance travelled and duration aloft in a gas-filled balloon.

Spidertracks began when New Zealand businessman, the late Michael Erceg, was lost in his helicopter for 17 days eight years ago.

The three Palmerston North friends and company founders thought there had to be a better way to find aircraft quickly when they crashed, and to hopefully save lives.