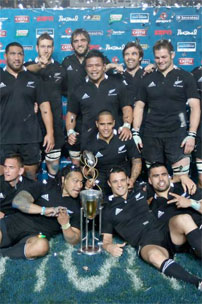 The world champion All Blacks routed Argentina 54-15 to secure the southern hemisphere’s inaugural Rugby Championship with a game to spare. New Zealand outscored the Pumas by seven tries in La Plata, all coming through the backs. Cory Jane touched down three times, fellow winger Julian Savea went over twice, with scrum-half Aaron Smith and inside centre Ma’a Nonu adding the others. New Zealand tops the standings with 21 points after five straight victories and has an unbeatable nine-point lead over second-place South Africa heading into the final round on 6 October when the All Blacks meet the Springboks in Soweto. “I don’t think too many teams have gone unbeaten previously,” All Blacks No. 8 Kieran Read said. “If we could win the inaugural championship and do that [this] week it would be a massive effort from us.”