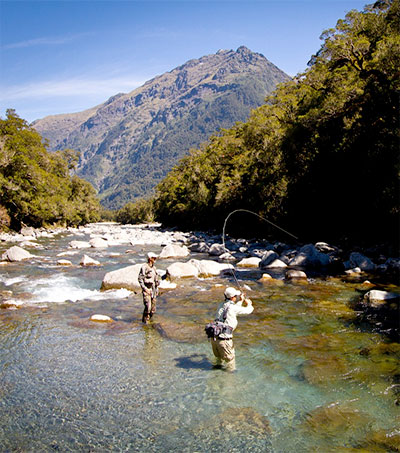 A combination of big fish, spectacular scenery and clear streams has made New Zealand, particularly the South Island, a “bucket bucket-list destination for diehard trout anglers”, according to American writer and fisherman Chris Santella.

“Like so many Kiwi inhabitants, both rainbow and brown trout were imported to the island nation in the 1800s – in their case, from California and Britain, respectively. With no natural predators, the fish have thrived,” Santella writes.

“Chris Daughters – guide, fly shop proprietor and now owner of Cedar Lodge in Makaroa – is an American who was drawn to the South Island more than 20 years ago.

“‘I was taken with the landscape, the friendly people and the quality of the fishing,’ Daughters says.

“‘Some years later, my wife, Shauna, took me to Cedar Lodge to celebrate my 40th birthday, and I was taken with the spot. Its location on the border of Mount Aspiring National Park provides fantastic access to a great diversity of water — big braided rivers flowing into the region’s vast lakes, intimate streams in steep valleys and wild, seldom-visited rivers on the west side of the Southern Alps that drain into the Tasman Sea.’

“A few years later when Cedar Lodge came up for sale, Daughters purchased the property.

“Cedar Lodge, established in 1979, holds a venerable place on the roster of New Zealand fishing lodges. Founder Dick Fraser helped pioneer heli-fishing on the South Island, flying anglers to stretches of river that might take days to reach on foot – if they could be reached at all.”