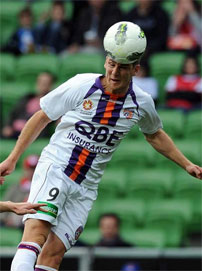 All Whites striker Shane Smeltz, 30, has scored his first A-League goals in a Perth Glory FC shirt to take his overall A-League goalscoring tally past 50. The double was enough to hand his team a 2-1 win over Melbourne Heart at AAMI Park and send it to equal-first on the ladder after two consecutive wins. Smeltz downplayed the importance of finally finding the back of the net after coming agonisingly close on several occasions in the previous game against Adelaide, claiming team results were more important. “It’s a fantastic start from the team and it’s just credit to what we’ve done in the off-season and pre-season and hopefully things start to go in the right direction for us,” Gold Coast-based Smeltz said.