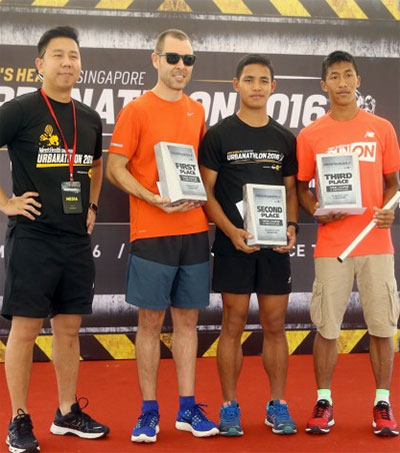 New Zealander Jason Lawrence, 35, (pictured second from left) has climbed, crawled and swung his way to a fourth Men’s Health Urbanathlon title in Singapore, topping a field of more than 3500 participants.

“I’m not as fit as I used to be and it has been three years since I last ran and won,” Lawrence said.

“This is the fourth time that I have won and I’m just going to make sure that I keep on winning it. This event is a lot of fun and it attracts many people that may not be keen on typical road races.”

The 14km race started and finished at the Kallang Practice Track. The route took participants past landmarks like the Esplanade and the Singapore Flyer.

Seven of the nine obstacles were new additions to this year’s race and one of them incorporated a CrossFit element for the first time.

Photo by The Straits Times.