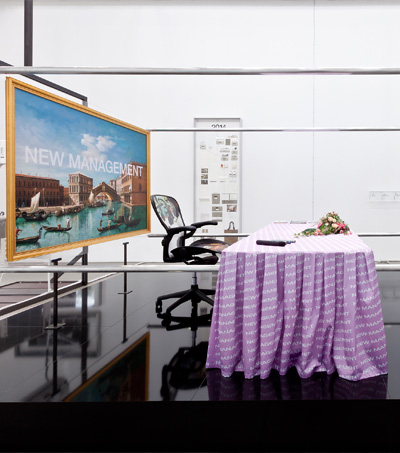 In a review in the prestigious New Yorker magazine, NZ artist Simon Denny’s exhibition The Innovator’s Dilemma is featured as one of the highlights of the New York arts scene.

The exhibition, which is being held at the MOMA PS1 in Queens, New York, highlights the New Zealander’s “talent for skewering the pretensions of the self-satisfied tech sector”.

The young artist is known for his ironic views of branding, commerce, and technology, which also manifests in the way in which his art is installed in his first major show at a U.S. museum.

Denny’s exhibition reminds of a trade show, with his art in booths “with hanging banners and carpeted display areas”.

Two years ago, the New Zealand-born, Berlin-based artist made headlines with a TED conference he co-organized at a museum in Liechtenstein, “in which the Alpine principality was depicted onstage as a Caribbean island (and) an offshore-banking haven presented as paradise.”