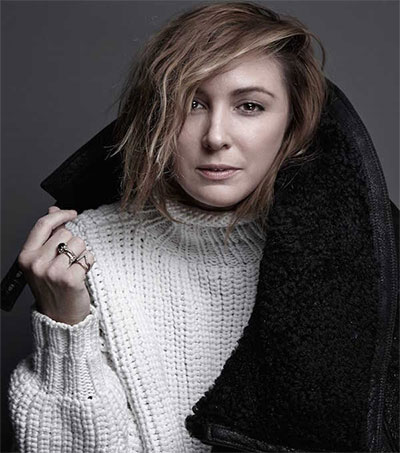 “I always wanted to have a really chic little everyday thing that I can wear around the streets. When you live in London, you know, you’ve got to walk everywhere but you’ve got to look cute,” Cooper tells the magazine.

The result, eight years later, is the label Beau Coops, which brings together design that is polished, but relaxed, in styles that bridge formal and casual, feminine and masculine – like a slip-on pointed loafer, a fresh take on a Mary Jane with a go-anywhere low heel and the now cult Beau 5 ankle boot.

A couple of fortuitous meetings followed the move to London – with Rocco Mascitelli from the NMI Group and José Neves, now owner of FarFetch – and having made connections with factories in Portugal, Cooper’s brand was born.

Now run largely out of Australia, Cooper is occupying a space that few brands currently do: producing quality shoes at accessible price points. The designer points to Masticelli’s existing relationships with factories as a factor that eased some of the challenge of getting a new label off the ground, and high costs.

“We really wanted the quality to be there, so it wasn’t just a style thing. [It has] all of the makings of a heritage brand. We wanted it to be a product piece that people would buy and have, potentially forever, in their wardrobes,” she says.

Now Cooper lives between Italy and London to easily keep check on production. The area she travels to, the Marches or Le Marche, is the same that produces product for big houses like Prada and Gucci. “We’re just down the road from the big Prada factory, Jil Sander …” Her prices she can continue to keep relatively low owing to her excellent relationships with the factories and a knack for hunting down good materials.

She operates off the idea that good design should be attainable. “I love to buy designer as much as the next girl does, but I think it’s nice to be able to have something which you don’t have to save up for necessarily. Something which you have in your wardrobe but it’s not going to kill you for two months to put it on to your credit card.”

Now, between working on showings in Paris, meeting with other creatives to work on future collections, setting her sight on the international market and sketching for the next collection, she’s maintaining an artisanal approach that’s becoming rarer in the industry and even harder to find born out of Australia. All up? A future classic to get on board with now.