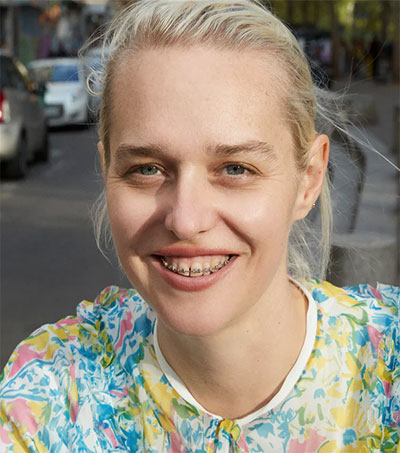 The videos and stills made by the New Zealand-born artist Sharna Osborne don’t look like anything else in the fashion world – or at least not like anything else being produced today, this decade, or this millennium, Christopher Wallace writes for monthly online resource, The Business of Fashion.

What reads at first as nostalgia in her work – nostalgia for 1980s and ‘90s style video imagery, perhaps (and specifically the heavily-duplicated VHS tapes of your favourite early MTV videos) – quickly leads the viewer to something else, to an awareness of the surfaces of the image: the flattened, washed-out cyan and magenta tones of early video, yes, but also of the materials by which the images were made and on which they were displayed – the clunky cameras spinning a wheel of tape, the convex screen of an 80s television.

“The texture of her image cuts against anything saccharine and it’s just really interesting,” says Francesca Burns, the stylist and co-founder of Print, who recently collaborated with Osborne on a 260-page zine insert. “I loved [her work] because there is something nostalgic about it but not at all retro. I find her images very sexy but not objectifying the subject there is real honesty there. They’re also incredibly feminine but not passive: the colour tone, the girlishness … but the grit.”

Growing up in rural New Zealand, Osborne had a lot of time to roam, to play, to think, and to fantasise – necessities, all, she says, to avoid the doldrums or discomfort of her solitude – and all of which comes to bear on the process she still uses. “It was just about me being able to fluidly disappear into [a fantasy world],” she says. “When I was young, I would pick up a bunch of sticks and, with that, I could create a world. The tools I use now are sort of the same.”

From building a Narnia with twigs to using a super-8 camera for a video of Mariah Carey – as she did for a recent issue of Love magazine – is the same magic, she seems to be saying. And Osborne’s particular magic has landed her squarely in the centre of a lively generation of creators in London, her home for the last ten years and where she is a member of fashion’s new guard.

In the last year or so, Osborne’s work with super-stylist and Love editor Katie Grand, including on the Mariah Carey story, have caused a stir of attention. She has worked on videos for Miu Miu, editorials for Dazed and i-D magazine, and was one of the first wave of artists to contribute to the relaunch of the British style and culture bible The Face.

Original article by Christopher Wallace, The Business of Fashion, October 11, 2019.