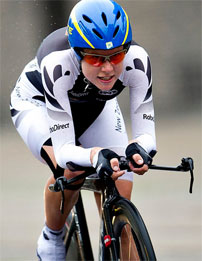 Linda Villumsen, cycling for New Zealand, earned silver in the elite women’s race against the clock at the 2011 UCI Road Championships in Copenhagen, while New Zealand cyclist James Oram won a silver medal in the junior men’s event. Adopted New Zealander Villumsen admitted, however, that half of her medal belonged to her native Denmark. “I would say it’s 50-50,” Villumsen said when asked who she had won the medal for. Villumsen swapped allegiances to ride for New Zealand in 2010. What is Denmark’s loss should be New Zealand’s gain. Having won a maiden world time trial medal, a bronze, in 2009 for Denmark, the 26-year-old has now won two time trial medals for New Zealand, bronze in 2010 and now silver.