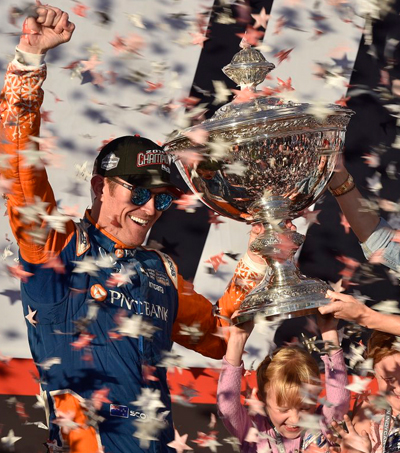 Scott Dixon has won his 5th IndyCar Championship after finishing second in the season finale, “the same place he started, behind Ryan Hunter-Reay,” as reported in an article in The Washington Post. “The fifth title moved him into second in IndyCar history, two behind A.J. Foyt.”

“I can’t believe this is actually happening,” said Dixon.

“You always doubt these situations and think they are never going to happen. It’s all about the people and I’m the lucky one that gets to take it across the line.”

“Dixon’s task was eased when challenger Alexander Rossi hit teammate Marco Andretti seconds after the start and broke his front wing. Rossi had to pit for a new part, dropped to last in the field, and the championship was pretty much decided.”

“As relaxed as Dixon appeared to be all day, he admitted after the race he didn’t let up in the race car after Rossi’s mishap. The title wasn’t secure, he said, until he made it through the final round of pit stops cleanly.”

“You just never know, anything can happen,” he said.

“We had a lot of grit. Rossi did a hell of a job, he’s been pushing so hard this year and he’s going to be a star.”

Race winner Hunter-Reay “praised Dixon as the greatest driver of this IndyCar generation.”

“It’s unthinkable what he’s accomplished,” said Hunter-Reay. “To share the track with him is awesome and to beat him is, too.”