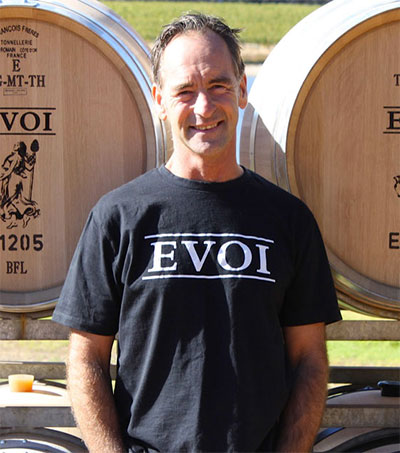 “Divine providence took its time before arriving on Nigel Ludlow’s doorstep. New Zealand born and educated, initially with a Bachelor of Science Degree in nutrition (useful for his early career as a triathlete), he tacked on a Graduate Diploma in oenology and viticulture from Lincoln University,” wine columnist James Halliday writes for The Australian.

“After a time at Selaks Drylands winery in Marlborough, he took off on Flying Winemaker stints in Hungary, Spain and South Africa.

“Returning to New Zealand, Ludlow became senior winemaker at Nobilo Wine Group, thence to Victoria working for the vast McGuigan Simeon winery. Margaret River had a magnetic pull and that’s where he went, to enterprises large and small – so small that his first vintage of Evoi chardonnay led to the barrels being installed in the lounge room of his house. More conventional storage space followed in 2010, the year in which EVOI first became a five-star winery in my Wine Companion,” Halliday writes.

“The stars aligned again in 2014, the year Ludlow leased space for his winemaking equipment in a commercial winery, marked also by five stars in the Companion. He was by then married with children, and production was rising at a fast rate to its 2017 level of 10,000 dozen. But it was neither perfect nor permanent, and it was time for divine providence to arrive. A nearby modern winery and surrounding vineyard became available at short notice. Ludlow was in the right place at the right time. After the winery equipment he’d accumulated over the years was installed, vintage got under way.”