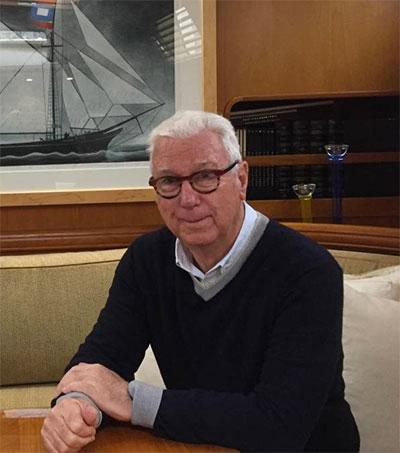 The gleaming yachts moored in Vancouver’s Coal Harbour are indelibly tied to wealth. Ron Holland would appear to fit the bill. The sailor’s 33-metre yacht Avalon, which he designed, is valued at a jaw-dropping $10 million. But for Holland, 70, a born-and-bred New Zealander, sailing isn’t a rarefied hobby for the affluent.

“Sailing is a hugely widespread endeavour,” Holland said in a recent interview.

“You can do it from a little canoe or a rubber tire dinghy in our swimming pool to a boat like Avalon.”

Holland has made a storied career out of sailing.

In his new memoir, All the Oceans: Designing By the Seats of My Pants, Holland recounts his days sailing as a child in a dinghy off the coast of New Zealand and the worldwide sail boat races he conquered.

He also describes his work as a yacht designer, through which he fashioned ships for the likes of pop group Duran Duran and the Austrian conductor Herbert Von Karajan.

Holland is entirely self-taught. After failing a crucial high-school exam in New Zealand, he learned the trade by competitive sailing and working as a wooden boat builder.

“If you’re going to be a yacht designer now, you would go to university,” Holland said.

“My yacht design lessons were based on my feeling of the boats worked by racing them.”

Tags: All the Oceans: Designing By the Seats of My Pants  CBC News  Ron Holland  yacht design