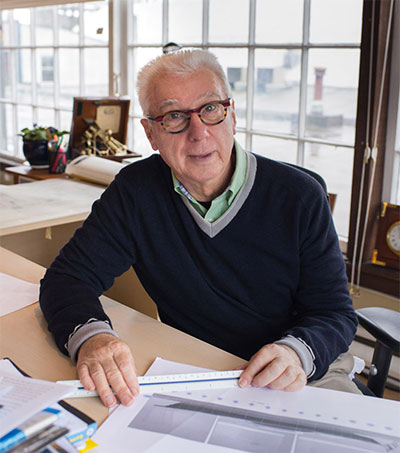 A visionary, an adventurer, a tireless innovator and the creator of a new generation of 100-foot-plus super yachts, Holland worked for a time at Pinellas-based Morgan Yachts, and it was in the Morgan shipyard that he built his first really, really famous sailing vessel. Like Holland himself, it’s the stuff of legend.

Holland, 71, is currently on a US book tour promoting his just-published autobiography, All the Oceans: Designing by the Seat of My Pants.

Holland grew up in Auckland, where, he recalls, every family had a boat – the majority of them built right at home – to sail the Hauraki Gulf and the Firth of Thames.

Holland arrived in St. Petersburg, Florida in 1972, accepting a job with Charley Morgan, whose Morgan Yachts was one of the most successful design and construction companies in the States. He became a well-known figure at the St. Petersburg Yacht Club, and in his memoir he recalls the organization “was primarily a social club but they also had a good racing organization … I spent most weekends racing around the magnificent Tampa Bay and Gulf of Mexico aboard a variety of yachts.”

It was here that Holland designed the first of his legendary vessels – a 24-foot racing boat called a “quarter tonner.” Called Eygthene, the scrappy little yacht was built for approximately US$6000.

Holland-designed yachts have won races, set records and sliced through every ocean on the planet for more than four decades.

“People encouraged me quite a few years ago to do a book,” said the yachtsman, who resides in Vancouver, British Columbia. “And I realised hey, it’s only half the story. But now was the right time, although there’s still some projects with old clients that would like me to be involved.”