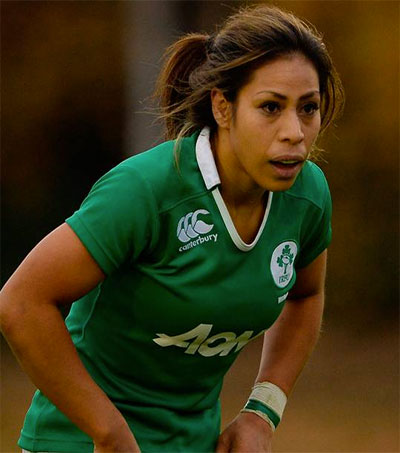 Spend any length of time with New Zealander Sene Naoupu, 35, and her love for friends and family will be palpable. But she doesn’t just value that ancestral bond, she cherishes it and is sustained by it, according to broadcaster, RTÉ Sport. Naoupu is a first generation New Zealand-born Samoan, and comes from the town of Oamaru. She now lives in Ireland, and her accomplishments are many.

Naoupu was part of the 2015 Six Nations winning team, and has represented Ireland at both 15s and 7s, playing in a Rugby World Cup and extensively on the 7s circuit. She recently completed a Masters in Sports Management, and following an exhaustive research process, now has her own coach-matching business.

In 2017, The Irish Times listed Naoupu as one of the thirty most influential women in Ireland, but her path in life hasn’t always been so immaculately paved, nor enjoyed with the sense of humble achievement she now exudes.

Last year, she shared with the world, a crack in that pavement and one which she says now shapes who she is.

A clinically depressed Naoupu lost her lust for life, her ability to play sport, and with it, her identity. She drifted from the world of athleticism, as if that part of her life had been a dream.

For Naoupu, there is no doubting the debt she owes her family for understanding exactly what she needed, even if she didn’t appreciate it herself at the time.

Since then, she has been transformed from a frail young girl to one of the most physically powerful centres in the bruising sport of international women’s rugby. She captained Ireland against England in the Autumn Internationals 2018, is now vice-captain for Adam Grigg’s Six Nations squad, and recently, she picked up her 31st cap for Ireland.

Now, Naoupu coaches young girls, and spends every waking minute thinking about how to make the experience of sport more valuable, fulfilling and life affirming for them. Does the title ‘role model’ sit well with her?

“Oh gosh, I don’t know. It’s an absolute privilege to even play sport, especially for a country that I wasn’t born in. I absolutely love playing rugby, all forms of rugby, and other sports as well, so even just to be able to play sport is a real privilege,” she says.

“You don’t have to have been through something extreme to reawaken your soul. Just keep filling your life with purpose and meaning and people worthy of your love and respect.”