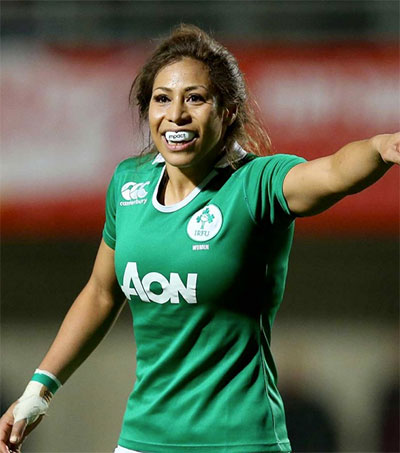 “In a short space of time, Naoupu has become a key player for the Irish women’s rugby team, and also an integral part of the Sevens team, which at times for those players involved in both camps, leads to controversial decisions such as pulling Naoupu, along with two of her teammates, from this year’s Six Nations campaign to compete in the Sevens in Las Vegas instead,” the Irish Times reports.

“As a centre, her speed, vision, and excellent set of second-nature skills, make her a ferocious force on the pitch. Technically gifted, strong and fast, Naoupu won the Women’s Player of the Year trophy at 2016 at the Rugby Writers of Ireland Awards.

“Naoupu moved to Ireland with her husband George, who played for Connacht before moving to Harlequins.

“She has spoken about overcoming anorexia, and it is that mental strength that seems to typify both her personality, fitness training work, and of course her rugby. With the World Cup in Ireland this August, and plenty of eyes on the host team, Naoupu is set to shine.”