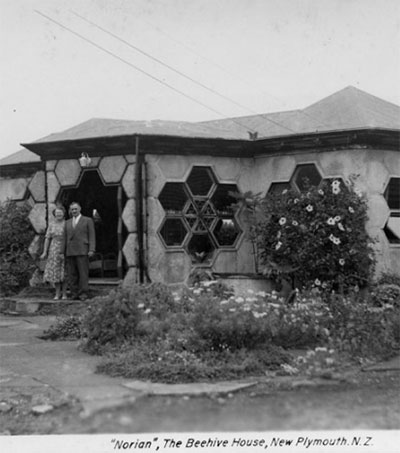 “No right angles.” That was the decree Roy Brewster set for himself and stood firmly by throughout his life. The New Zealander, born in 1905 in Taranaki, instead embraced angles of 120˚; he was an avid apiarist, and to him, life’s perfect shape was the hexagon. Claire Voon rediscovers his unique style for arts site Hyperallergic.

To rid his life of the right angle – which, to him, represented nonsense, confusion, and hate – Brewster designed and built a house in 1952 that celebrated the six-sided figure. Modelled on the structure of honeycomb cells, it soon became known to many as The Beehive House.

Nearly everything was hexagonal, from its floor plans to its windows to its shelves. A hexagonal quilt adorned the bed he shared with his wife, Nettie, and a copy of the Mona Lisa hung in the living room in a hexagonal frame, against hexagonal parquet wall panels. Outdoors, the garden’s paving stones led to an angular letterbox. The official name Brewster gave it was “The Norian House” – shorthand for “NoRIght ANgles.”

Brewster dismantled his one-story building at 36B Sanders Avenue, New Plymouth in 1974, but the city’s Puke Ariki library holds some of its fixtures and furnishings.

Brewster’s ideas didn’t spread far, although he would share his vision of a world wiped of right angles with visitors to his Norian House. Between 1954 and 1971, it was a tourist destination, attracting around 250,000 guests who would sign their names in a hexagonal guestbook (which featured stamps Brewster designed to divide pages into hexagonal cells for individual entries).

Although concerned with urban design, Brewster had also, since young, been fascinated with the sky and aerodynamics. Diagrams and photographs of flying machines he invented and built – incorporating hexagonal forms, of course – accompany his meticulous notes on his architecture. They exemplifying how fervently he lived by a philosophy many others often ignored or who viewed his creations only as novelties. His planes may not have always flown, and his grandest idea never took off – but we should celebrate Brewster’s legacy, as an architect inspired by the smallest of structures to calculate solutions for our sprawling world.