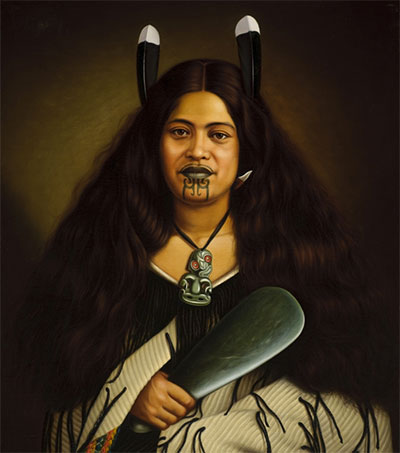 “[The portraits] represent the largest assembly of Lindauer’s works ever, the politicians, tribal leaders, warriors, tohunga, and others from generations past.

“Many of Lindauer’s sitters lived in the decades marked by violent conflict over land ownership between the colonial government and indigenous tribes; their narratives, some drawn from living descendants, accompany each of the portraits, and the histories are as compelling as the images themselves.

“For Maori, these images honoured tribal members and memorialised ancestors in a new medium – carving, traditionally, was the art of choice. They hung the finished works not only in private homes but also in marae and brought them out at funeral ceremonies or other significant occasions.

“Some Europeans commissioned Maori portraits as records of an ‘exotic’ local history, and ownership of them symbolised colonial control.

“As art historian Leonard Bell summed it up in a catalogue essay: ‘On one hand, a portrait could commemorate the presence, mana, and spirit of the subject. On the other, a portrayed person could be transformed into an exotic spectacle in which the figure was an actor.’

“In creating each [portrait], [Lindauer] was often helping someone assert an identity for posterity in a time of shifting ones. Those intentions resonate even more strongly today, as many of his paintings represent the only surviving images of Maori ancestors. Encountering them now, as Maori or others, invites all to explore specific histories that may otherwise have been overlooked, or simply, forgotten.”