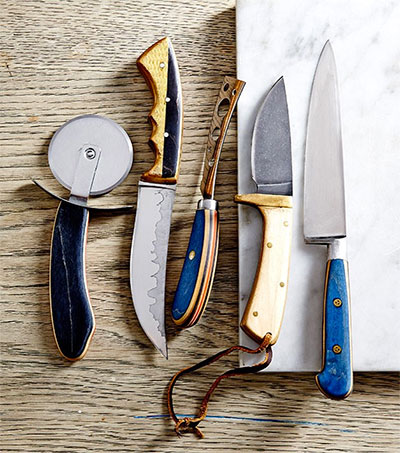 As a child growing up in rural New Zealand, Rowland Perry always had the need for a blade. Now, the Sydney-based skater and designer is making his own, refashioning old skateboards into bespoke kitchen tools.

A friendly competition with his dad to make a knife in 2013 prompted Perry, a production supervisor at Dinosaur Designs, to start Skate Shank.

“I’ve been skateboarding since I was eight or nine and I’m 30 now so it’s definitely played a huge part in my life,” Perry says. “Sanding a skateboard back, you don’t necessarily know what’s on the other side. Different colours come through – a layer of black laminate, then a natural colour, then a pink or a green – it’s a nice surprise.”

Most of the metal Perry sources for the knives comes from Finland, and he produces between 10 to 15 knives each skateboard.

“There are a few areas that you can’t use with the concaves and the curves, but any smaller pieces can be used to make cheese knives, as they don’t use that much timber,” he says.