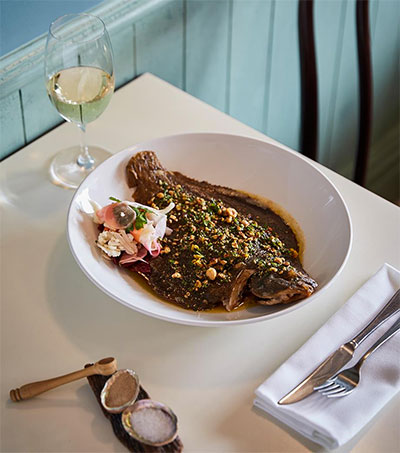 Growing up in Taranaki, exposed Shewry to the wonders of fresh seafood from a young age, and sparked his early ambitions to become a chef. His career kick-started with a stint at Wellington’s Roxburgh Bistro, and has culminated in numerous accolades for Attica, and Shewry’s reputation as not just one of the country’s best chefs, but also as an outspoken advocate for sustainability in his adopted homeland and his original island home.

“Sustainability in Wellington is even more important than [in] other places, as the entire city is, almost, wrapped with coastline,” he explains.

On his recent visit to Wellington, Shewry was given the opportunity to connect with other like-minded producers such as Scott and Maaike McNeil, owners of small wild food provedore Awatoru. Supplying many of Wellington’s top restaurants with line-caught albacore tuna, Karamea whitebait and paddle crab, their small-scale approach to sourcing seafood resonates deeply with Shewry.

No visit to New Zealand’s capital is complete without a meal at Ortega Fish Shack (pictured).

Hand-painted across the entry wall in Rita in Aro Valley are the words “This heavenly place”, an apt description for the love and passion that co-owners Paul Schrader, Kelda Hains and Matt Hawkes put into this suburban bistro. The motto is taken from a letter by Hains’ grandmother, encouraging the chef make haste on opening a restaurant where everyone could enjoy her food.

“Rita is a truly sustainable, seasonal, local restaurant where the farmers dictate the restaurant and not the chef,” Shewry says.