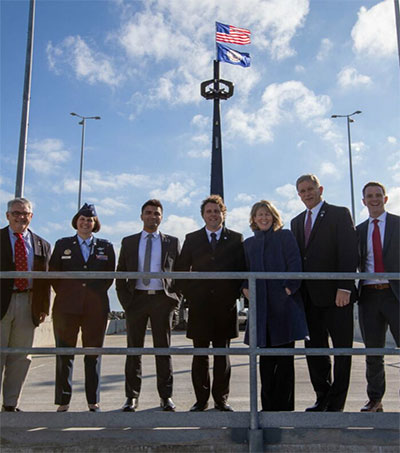 Rocket Lab recently celebrated the opening of a launch complex on the Virginia coast in the United States, half a world away from its first launch pad in New Zealand, award-winning science writer and veteran space reporter Alan Boyle writes for GeekWire.

The California-based company’s New Zealand-born CEO, Peter Beck (pictured centre), announced that the first liftoff from Launch Complex 2 at Virginia’s Mid-Atlantic Regional Spaceport on Wallops Island would put an experimental satellite into orbit for the US Air Force early next year. The Air Force’s Monolith nanosatellite will test a miniaturised system that’s designed to keep track of space weather.

Over the past two and a half years, Rocket Lab has conducted 10 low-cost launches of its Electron rocket from Launch Complex 1 on New Zealand’s Mahia Peninsula. Seattle-based Spaceflight has played a role in several of those launches by arranging the logistics for secondary satellite payloads.

Rocket Lab announced its plans for Launch Complex 2 a little more than a year ago. “It was a very rigorous process,” Beck said during a news briefing. “And it seems such a short time ago that we sat here and announced that we would be building something in Wallops.”

The Virginia launch site, which is on the grounds of NASA’s Wallops Flight Facility, is likely to cater to the Air Force and other US Government customers. Rocket Lab said it plans to conduct up to 12 launches a year from Virginia, but New Zealand’s Launch Complex 1 will continue to serve as its primary pad, with the capacity to support up to 120 launches a year.

Rocket Lab’s Electron can send up to 500 pounds of payload to low Earth orbit (depending on the orbit) for a price in the range of US$5 million to US$7.5 million. The company plans to reduce launch costs further by making its first-stage booster recoverable and reusable.