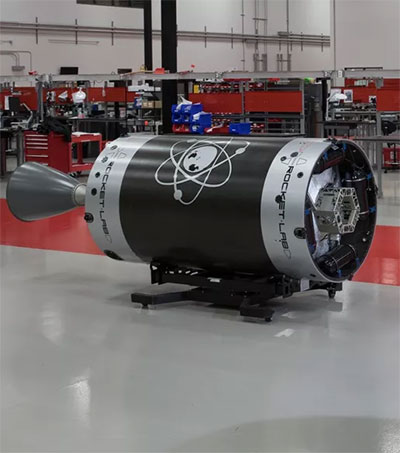 Small satellite launcher, New Zealand-founded Rocket Lab is getting into the business of making satellites in addition to launching them. The company has announced that it is offering a new service to customers: a standard satellite that can be tailored to anyone’s low Earth orbit business needs. Such satellites are designed to launch to orbit on Rocket Lab’s Electron rocket, creating a streamlined mission to space.

Rocket Lab’s offering is a circular satellite called the Photon. Capable of weighing up to 170kg, it comes equipped with propulsion, GPS, and more. The satellite design is derived from Rocket Lab’s kick stage – a cylindrical spacecraft that the company puts at the top of its rockets to give payloads an extra boost into orbit. So far, Rocket Lab has launched its kick stage four times, giving the company a good idea of how the Photon might behave in space.

The idea to turn the kick stage into a satellite seemed like a natural next step, Rocket Lab’s CEO Peter Beck says. “It always seemed bizarre to me that you would have a [spacecraft] that has all the same components as the satellite literally six inches away from each other,” Beck tells The Verge, referring to the Electron kick stage.

“But we wouldn’t talk to each other and we’d just push each other off, and that would be the end of it. It just seemed bizarre that we would do that rather than actually just combine everything into one unit.”

The goal of the Photon project is to create a standardised satellite that can easily carry customers’ payload ideas to orbit. Often, satellite operators need to build a complex spacecraft just to house one specific sensor or camera that will gather data from space. Rocket Lab hopes to take care of the spacecraft manufacturing part, allowing customers to simply add their payload to an existing satellite design. “People don’t have to spend a whole lot of time becoming experts and building spacecraft to get their idea on orbit,” Beck says.

Beck argues that by offering both a satellite and a rocket to launch that satellite, the process of getting payloads into orbit will be much more streamlined. “You get a lot of efficiencies by having a one-stop shop,” he says.

Rocket Lab won’t give an exact price for the Photon, arguing that its costs vary significantly depending on the type of payload a customer wants to attach. Plus the price will change depending on how much of Rocket Lab’s management is involved. However, Beck says that one launch of the Electron starts at around $6 million, based on the launches the company has done to date.

Once the Photon platform gets into full swing, Beck envisions numerous types of applications for the satellite, such as satellite television or Earth observation. There’s even the possibility of using the Photon to beam internet from space, a concept that numerous companies like SpaceX, OneWeb, and now Amazon are pursuing. And for those who chose the Photon, the rocket comes guaranteed. “We have a real advantage here in that it’s a rocket and satellite all bundled together in one.”