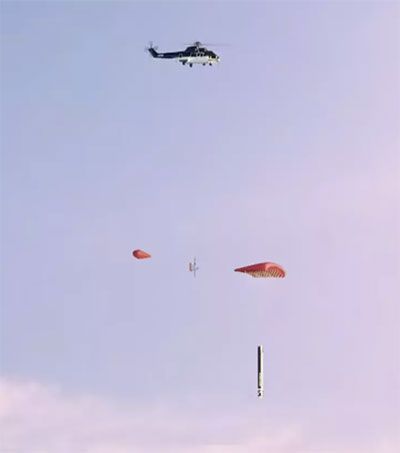 New Zealand-founded California-based Rocket Lab wants to use a helicopter to “catch” the first stage of its Electron rocket as it floats toward the ground with a parachute, according to Robert Mogg reporting for news site, Digital Trends.

The Electron is considerably smaller and lighter than the hefty Falcon 9 rocket, enabling the possibility of helicopter intervention, Mogg writes.

If Rocket Lab achieves its goal of creating a reusable system with its Electron rocket, it’ll be only the second company after Elon Musk’s SpaceX to do so, Mogg writes.

Rocket Lab was founded by Invercargill-born Peter Beck in 2006 as a small-satellite launcher for customers that in the last couple of years have included NASA and DARPA, among others. Creating a reusable rocket system allows a space company to dramatically reduce operating costs as it doesn’t have to constantly invest in building new boosters. It also enables a faster turnaround time for more frequent launches, further lowering overall costs.

Beck discussed the ambitious helicopter plan at the Small Satellite Conference in Utah earlier this month, revealing that Rocket Lab’s recent missions have been gathering data to help his team achieve the delicate act of plucking a falling booster out of the sky.

According to Rocket Lab on its return to Earth after launch the booster would deploy a parachute together with a tether kept in a horizontal position by a small balloon. The approaching helicopter would then grab the booster by using a specially made device to hook the tether, after which everything is carried to a waiting ship.

A date for testing the system hasn’t been revealed, but a first attempt could be made sometime next year. In the meantime, the team will also attempt to reuse boosters that come down in the sea.

“From day one, Rocket Lab’s mission has been to provide frequent and reliable access to orbit for small satellites,” Beck said. “Having delivered on this with Electron launching satellites to orbit almost every month [since November 2018], we’re now establishing the reusability programme to further increase launch frequency.”